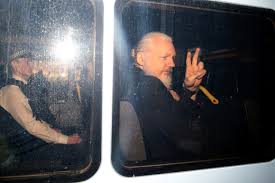 The worst fears of Julian Assange's legal team have just been realized.

Just as Wikileaks' editor in chief anticipated, the DoJ has revealed that a grand jury in Virginia has returned a new 18-count superseding indictment against Assange that includes violations of the Espionage Act stemming from his role in publishing the classified documents leaked by Chelsea Manning, as well as his original charge of conspiring to break into a government computer, per the New York Times.

The DOJ said with the indictment that Assange will face a maximum of 10 years for each of the 17 Espionage Act violations, plus the five-year penalty for his earlier hacking charge.

In addition to significantly raising the punishment threshold (from a maximum of 5.5 years under the previous indictment to the prospect of a death sentence for violating the Espionage Act), the new charges will raise serious first amendment issues as Assange will become the first journalist charged under the Espionage Act.

Though it's not a guarantee, Espionage Act violations have, in the past, carried the prospect of a death sentence, though Assange's specific violations will likely spare him the possibility of such a fate (read more about Assange's charges here).

For context, the Espionage Act of 1917 has been used to convict suspected spies - most famously Julius and Ethel Rosenberg. The Rosenbergs were famously put to death by electric chair in 1953.

The Justice Department's decision to pursue Espionage Act charges signals a dramatic escalation under President Trump to crack down on leaks of classified information and aims squarely at First Amendment protections for journalists. Most recently, law enforcement officials charged a former intelligence analyst with giving classified documents to The Intercept, a national security news website.

Legal scholars believe that prosecuting reporters over their work would violate the First Amendment, but the prospect has not yet been tested in court because the government had never charged a journalist under the Espionage Act.

Though he is not a conventional journalist, much of what Mr. Assange does at WikiLeaks is difficult to distinguish in a legally meaningful way from what traditional news organizations like The New York Times do: seek and publish information that officials want to be secret, including classified national security matters, and take steps to protect the confidentiality of sources.

Per the NYT, the Obama administration considered bringing the Espionage Act charges against Assange, but balked because it didn't want to raise the First Amendment issue. While Wikileaks had warned of this possibility, they suspected that the US would wait until Assange was on American soil before bringing Espionage Act-related charges, since they would carry a much more severe penalty.

Wikileaks said the new charges were "madness" and that this would be "the end of national security journalism."

Exposing War Crimes Should Always Be Legal... Committing And Hiding Them Should Not

If You're Surprised By Tik Tok, You DON'T Want To Hear About This!

Daniel Ellsberg Testifies in Defense of Julian Assange and WikiLeaks

This Is Outrageous How People Are Allowing This To Happen!