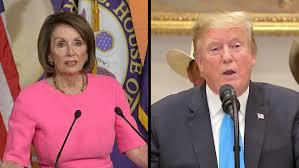 WASHINGTON (AP) — She's calling for an "intervention" to save the nation from him. He says she's "crazy."

The enmity between President Donald Trump and House Speaker Nancy Pelosi deteriorated Thursday into rude-and-then-some questioning of his fitness for office and her sanity, with personal attacks flowing from both the nation's top elected officials after a dramatic blow-up at the White House.

However intended, the exchanges left uncertain ahead of the 2020 election whether Trump and the Democrats will be able to work together on serious, must-pass tasks, such as funding the government and raising the federal borrowing limit, let alone thornier issues such as immigration, national security and more.

Pelosi went first, with demure shrugs and practiced sass. Then, as a tornado warning blared across Washington, Trump followed with a derisive nickname — something he had declined to give her, up to now.

"She's a mess," Trump told reporters at an afternoon news conference in which he lined up White House staff to testify to his calmness the day before when he walked out after three minutes at a meeting with Pelosi and Senate Democratic leader Charles Schumer.

"Crazy Nancy. ... I watched Nancy and she was all crazy yesterday."

As for himself, he declared, "I'm an extremely stable genius."