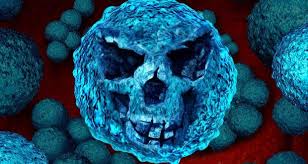 The discovery and widespread use of antibiotics many decades ago have saved millions of lives. Infections that were once a death sentence were easily treated with the medications. Unfortunately, many antibiotics are now becoming ineffective because bacteria have become resistant to the drugs.

We have overused antibiotics with reckless abandon and are now beginning to see the consequences. Some bacteria have mutated into "superbugs".

We've used antibiotics so freely, some bacteria have mutated into so-called "superbugs." They've become resistant to the very drugs designed to kill them. A study commissioned by the British government estimates that by 2050, 10 million people worldwide could die each year from antibiotic-resistant bacteria. That's more than currently die from cancer. (source)

Infections by drug-resistant microbes may eventually be the leading cause of death.

The World Health Organization predicts that worldwide death rates from drug-resistant microbes will climb from the current 700,000 per year to 10 million by 2050. At that point, they will have surpassed cancer, heart disease, and diabetes to become the main cause of death in the human race.

Antibiotic resistance is one of the biggest health threats of our time, according to the Centers for Disease Control and Prevention (CDC):

Antibiotic resistance has the potential to affect people at any stage of life, as well as the healthcare, veterinary, and agriculture industries, making it one of the world's most urgent public health problems.

Each year in the U.S., at least 2 million people are infected with antibiotic-resistant bacteria, and at least 23,000 people die as a result. (source)

Karen Hoffmann, who heads the Association for Professionals in Infection Control and Epidemiology, told Newsweek those figures may be on the low side:

"It's probably a vast underestimate. We don't have a good reporting system for multiresistant organisms, so we don't really know."

Studies suggest the cost to the U.S. health care system of treating patients with these resistant infections tops $3 billion a year.