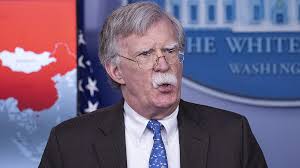 Senator Rand Paul has warned that White House national security adviser John Bolton is "a malignant influence," and that he is leading the US toward a war with Iran from which there is no turning back.

Speaking Thursday, Paul expressed alarm at the escalation of the rhetoric between the US and Iran, and the deployment of an aircraft carrier strike group and an Air Force bomber task force to the Persian gulf.

"I fear that he's a malignancy, a malignant influence on the administration." Paul said of John Bolton, who reportedly had a significant role in the deployment.

"I think the most important thing is to put the administration on notice that they do not have congressional permission to go to war with Iran." Paul urged.

"We need to make sure we're not involved in anything that is provocative enough to encourage a skirmish that leads to a bigger war," the Senator added, warning that "provocation can occur on both sides and we need to be wary."