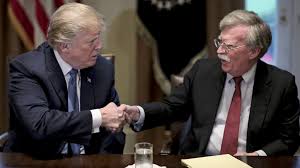 Of course, the first question that naturally arises is: Who's the real acting president, Donald Trump or John Bolton? The Washington Post reports that Trump is lamenting that Bolton wants to get him "into a war." So, who's in charge — Bolton or Trump?

The second question that arises is whether Bolton will succeed in achieving a war with Iran, either by provoking an Iranian attack on "U.S. interests" or by just concocting an attack, which would then enable him to exclaim, "We have been attacked! We are innocent! We had no idea that this was going to happen! We are peaceful regime! We are a force for good in the world! Unfortunately, we now need to carpet-bomb Iran to defend ourselves."

After all, isn't that what happened with Iraq, a country whose government never attacked the United States or even threatened to do so? Hundreds of thousands of Iraqi people killed, tortured, maimed, or injured. Countless homes, businesses, industries, roads, and bridges bombed and destroyed. A brutal and ruthless multi-year military occupation to protect a crooked, corrupt, and tyrannical puppet regime, all billed under the false label "Operation Iraqi Freedom."