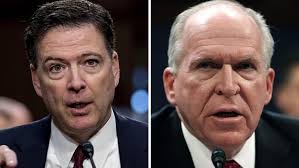 According to Fox News, an email chain exists which indicates that Comey told bureau subordinates that Brennan insisted on the dossier's inclusion in the intelligence community assessment (ICA) on Russian interference. Also interesting is that the dossier was referred to as "crown material" in the emails - a possible reference to the fact that Steele is a former British spy.

In a statement to Fox, however, a former CIA official "put the blame squarely on Comey."

"Former Director Brennan, along with former [Director of National Intelligence] James Clapper, are the ones who opposed James Comey's recommendation that the Steele Dossier be included in the intelligence report," said the official.

"They opposed this because the dossier was in no way used to develop the ICA," the official continued. "The intelligence analysts didn't include it when they were doing their work because it wasn't corroborated intelligence, therefore it wasn't used and it wasn't included. Brennan and Clapper prevented it from being added into the official assessment. James Comey then decided on his own to brief Trump about the document."