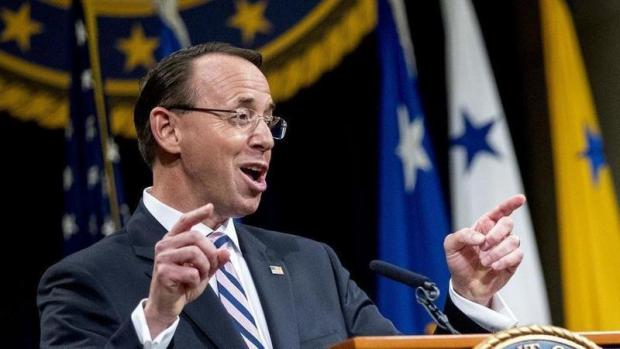 Speaking on Monday at the Great Baltimore Committee Monday evening, Rosenstein discussed several topics, including his handling of the Russia investigation and his recommendation to President Trump to fire Comey, who Rosenstein called a "partisan pundit"

While discussing Comey's handling of the Hillary Clinton email investigation, Rosenstein said that "while there are many issues in our line [of work] in which a range of decisions may be reasonable, there are bright lines that should never be crossed," criticizing Comey's decision to hold a July 2016 press conference in which he explained why Clinton would not face charges. He then slammed Comey's 11th hour letter to Congress days before the 2016 election explaining that decision.

"Those actions were not within the range of reasonable decisions," said Rosenstein. "They were inconsistent with our goal of communicating to all FBI employees that they should respect the attorney general's role, refrain from disclosing information about criminal investigations, avoid disparaging uncharged persons, and above all, not take unnecessary steps that could influence an election."