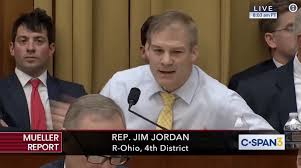 As Democrats on the House Judiciary Committee - led by Chairman Jerry Nadler - voted to hold AG William Barr in contempt on Wednesday, one Republican wasn't having it.

During a heated diatribe during the vote, Jordan refused to yield and instead accused Democrats of trying to punish Barr for vowing to expose skullduggery by the Democrats and the Deep State during the campaign - particularly as it pertains to the provenance of the Russia collusion probe.

When it came his turn to speak, Jordan laid out everything Barr had said about his efforts to investigate exactly how the Russia probe was initiated, and look into suspicions that senior FBI and DoJ officials colluded with the Democrats to create an "insurance policy" to stop Trump. Jordan accused the Democrats of trying to punish Barr for simply following the law, while covering up for the FBI's malfeasance and politically motivated interference.

"He's going to get to the bottom of everything, he's going to find out how and why this investigation started in the first place. Never mind what he said three and a half weeks ago when he testified before the Senate Finance Committee. He said four very interest things: First he said there was a failure of leadership at the upper echelon of the FBI."

Out of everything Barr has said during his appearances before Congress over the last month, Jordan focused on one: Barr's claim that he has found evidence suggesting that "spying did occur," and that said spying may have been politically motivated - a reference to what has become known as "spygate".

"Second thing he said...spying did occur. Third, he said, there's a basis for my concern about the spying that took place. And maybe the most interest thing - two terms he used that frankly I find frightening - he said in his judgment that it looks like there might have been unauthorized surveillance and political surveillance."

During his speech, Jordan cited a 2017 interview with Senator Chuck Schumer on the Rachel Maddow show where he said "if you take on the intelligence community, they have six ways from Sunday for getting back at you."

As far as Jordan can tell, the intelligence community took two concrete steps to try and get back at Trump for all of his deep state rhetoric.

"I don't know if the FBI went after Trump in six ways, but they sure went after him in two ways. One was the dossier...the FBI used one party's oppo research to get a warrant from a secret court to spy on another campaign."

What if there was an approach to put options that turned convention on its head? Join OIC on May 15, 3:30 PM CT, for expert insight on cash-secured puts and the unique methodology behind their execution. We'll cover the basics of put options, moneyness, expiration positions and more. Plus, you'll get to see plenty of examples with P&L diagrams, all covered in detail by one of OIC's professional instructors. Join the thousands of investors attending OIC webinars and register today!

Sponsored By : The Options Industry Council

"Second, just last Thursday, New York Times story, the FBI sent an investigator pretending to be somebody else to talk with George Papadopoulos who was working with the Trump campaign. You know what they call that? It's called spying. Think about the term he used: Political surveillance."

Asked to yield his time, Jordan replied "I will not yield."

Unfortunately, Republicans weren't able to stop the contempt vote from moving forward, but now that Trump has invoked executive privilege to protect the unredacted Mueller report and any related materials - which Democrats had demanded Barr release to them.

Bill Barr is following the law. What's his reward? Democrats are going to hold him in contempt. pic.twitter.com/slK3cXf3k2