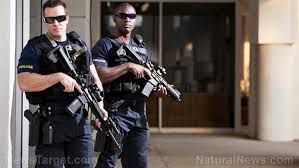 (Natural News) A recent shooting incident in California involving two police officers proves yet again why our founders resisted any attempts to disarm citizens and instead urged them to acquire and keep firearms, and then become proficient with them.

As reported by CBS Sacramento, a pair of Elk Grove police officers are now recovering after they accidentally shot each other while in pursuit of a suspect.

The news site noted that officers received a call around 11 p.m. Saturday for a travel trailer burglary whereby the caller said he witnessed a man shift a gun from his pants pocket to a sweatshirt pocket. Initially, an officer showed up and made contact with a man and a woman near the trailer.

The officer followed a male to a nearby Walgreens parking lot where he was joined by another police officer, according to the Elk Grove Police Department.

A resident who was watching the situation unfold, Dean Trafton, told the news station, "I said get out of the window because there's going to be bullets spraying here in a little bit."

Turns out he was prophetic, per CBS Sacramento:

All three men were taken to the hospital. Each officer suffered a non-life threatening wound to their lower leg.