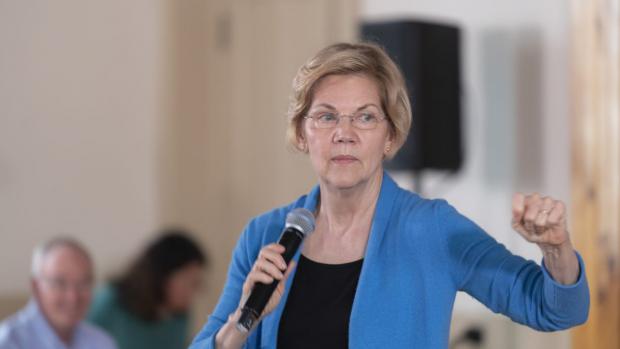 The Massachusetts senator wants to spend $1.25 trillion on a plan to wipe out student loan debt and make public tuition free.

Elizabeth Warren, the Democratic primary's foremost Game of Thrones recapper, styles herself a staunch defender of the little guy. In her campaign announcement, for example, the Massachusetts senator declared that millions of American families are currently "struggling to survive in a system that's been rigged, rigged by the wealthy and the well-connected." She's a true champion of the struggling middle class, the sort of grounded and relatable politician who knows what it's like to be 29 years old and still sharing your parents' HBO GO password.

In addition to ending tuition at public colleges, Warren wants to cancel the vast majority of outstanding student loan debt. The idea is to eliminate debt up to $50,000 for people with household incomes under $100,000, and offer more limited debt cancellation for households making between $100,000 and $250,000. By her own estimates, the full plan, which also includes funds for Pell Grants and historically black colleges, would cost about $1.25 trillion, which she says she would pay for with a tax on wealth that she announced earlier this year.

On the surface, Warren's idea might sound like another expensive federal benefit for struggling families. But the nature of college attendance and student loans means that Warren's loan forgiveness plan is a massive giveaway to relatively well-off people.

In the U.S., only about a third of people over 25 have a college degree, making them a comparatively elite group whose elite status is reinforced by, among other things, the connections they make while at college.

College graduates aren't, for the most part, super rich. But generally speaking, they are far more comfortable than the majority who lack such degrees. And the rich, however you define that word, are a class comprised almost entirely of people who graduated from college (with, yes, a handful of notable exceptions). This is a plan that provides a rather large benefit for them.