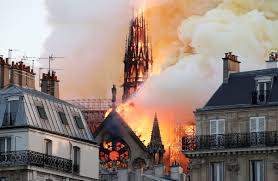 Update 2: Ever careful to watch for false-flags and conspiracy theory concerns, video is emerging of a Gilets-Jaunes in black clothes at one of the two towers half an hour after the start of the fire at Notre-Dame...

#Update: Just in - The crown of thorns was also been saved inside the cathédrale Notre-Dame de #Paris. #NotreDame #France pic.twitter.com/1QNqyYWAmC

One definite way to disenfranchise the yellow vests - as they crush French autocracy - would be to set them up as the fall-guys for this national disaster. Surely that is not possible!

Update 1: A silver lining - if that's possible: a Catholic priest was today hailed a hero as it emerged he entered the Notre-Dame last night during the height of the inferno to rescue precious cathedral relics including the Crown of Thorns.

The hallowed artefact, which symbolises the wreath of thorns placed on the head of Jesus Christ at his crucifixion, was stored in the cathedral's treasury and was brought to Paris by French King Louis IX in 1238. Jean-Marc Fournier, Chaplain of Paris Fire Brigade, was also said to have saved the Blessed Sacrament last night from the 850-year-old Gothic masterpiece.

"Nothing indicates a deliberate act."

SAFETY NET UK internet capacity could be RATIONED to prioritise...

How To Stay Informed, Connected and Do Business In Spite Of State Censorship

Netflix asked to slow down streaming so the internet doesn't break

No Cell Signal, No Wi-Fi, No Problem. Growing Up Inside America's 'Quiet Zone'

Ninth Circuit rules against Prager U in YouTube censorship lawsuit

UK Google Data Transfer To US Is Just The Start: "Possibilities For Abuse Are Enormous"

The 9 Best Browsers for Linux