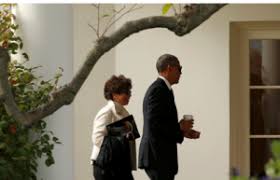 Valerie Jarrett, a top adviser to former President Barack Obama, published a book that ranks dismally on Amazon and at Barnes and Noble, but was placed on The New York Times Best Seller list.

Anomalies around the book's sales figures in industry databases have some in the book business questioning whether Jarrett, who's rumored to have received a million-dollar-plus advance, paid a company to game the numbers.

Her book, which was published April 2, is number 1,030 on Amazon's list of top sellers and has only three reviews on the site. It similarly ranks 1,244 on Barnes and Noble where signed copies are being sold for less than the suggested retail for unsigned copies.

Yet the book was also 14th on the NYT bestseller list.

"Given the organic sales of that book and the fact that during the entire week of rollout it barely cracked the top 100 on Amazon, there's no way the book should have a place on the NYT Best Seller list. Inconceivable," one prominent book industry insider, speaking on condition of anonymity, told The Daily Caller News Foundation. "There's likely an effort to game the system, it's the only explanation."