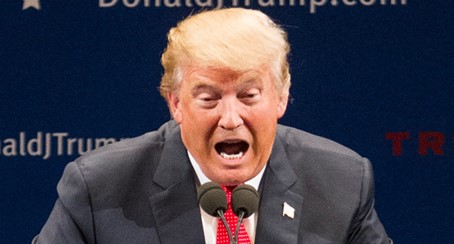 On March 6, 2016, this Deplorable issued a statement formally endorsing Donald J. Trump for the presidency of the United State.

I now hereby withdraw that endorsement.

No doubt this declaration from your Working Boy will be greeted with the same deafening indifference as my earlier less than earth-shattering announcement of support.

Keep calm. The planet will continue to spin on its axis at a 23.44 degree tilt.

As I tweeted on April 4, when it appeared that Ecuadorian President Lenín [sic] Moreno was going to cough up Julian Assange:

"If this comes to pass & #JulianAssange is brought to #US in chains like a Gaulish chieftain in a Roman triumph can we definitively declare that any possible #Trump revolution is over & the #DeepState won?"

A quick perusal of social media since Assange's arrest shows that many others have reached a similar conclusion.

But why? To be sure, there have been other betrayals. The two strikes on Syria on phony chemical warfare accusations come immediately to mind. Or Trump's failure to build the Mexican wall, coupled with repeated humiliating defeats in Congress with the predictability of Charlie Brown's getting suckered by Lucy into trying to kick the football.

At the same time there were excuses. On Syria, maybe the President was fed false intelligence. Or maybe Ivanka was upset: Daaaddyyy, you have to dooo something! Or maybe Trump knew the CW accusations against Damascus were fake but felt he had to act (an ominous sign in itself) to deflect charges of being Putin's puppet, hence what could be deemed deliberately pinprick pro forma strikes. On the wall, well you can't trust lawyers' advice, he just doesn't understand his legal authority well enough, or maybe he…

But the Assange arrest and his upcoming renditi- – oops! – extradition to the United States are different. There's no nuance. No excuse. No false intel report. No poor legal advice.

It's plain and simple. The same entities (Deep State, permanent government, the oligarchy, the Borg, whatever term you like) that targeted Trump with the phony Russia collusion narrative want Assange's scalp nailed to the wall. It's one thing for favored outlets like the Washington Post and CNN to disseminate classified information that favors the Deep State, quite another to reveal information contrary to its interests. As the premier dispenser of embarrassing secrets that facilitates online dissidence from the established narrative (also under attack by governments and their tech giant accomplices) an example must be made of Assange pour encourager les autres. He can count on being sentenced to rotting for decades in a nasty Office Space federal prison (the US will gladly waive the death penalty to spare the Brits' prissy Euro-consciences) but may very well die soon enough of natural causes, perhaps like Slobodan Miloševi?.

An essential role in Assange's betrayal by Moreno was played by Trump's Veep Mike Pence and Secretary of State Mike Pompeo. Former President Rafael Correa says a direct condition of Moreno's getting a $4.2 billion IMF loan was Assange's head on a platter. That's a lot more plausible than establishment media reports that Assange was ejected for transgressing the Ecuadorians' fastidious hygiene standards, which (whether based in fact or not) are just cynical defamations to justify his upcoming lynching.

It's irrelevant whether Trump – who theoretically is the boss of all US agency operatives working with their Brit colleagues to get their mitts on Assange – let the nab go forward because he was unwilling to order his minions to stand down or was powerless to do so. In that regard, it's similar to pointlessly asking why he has the terrible, horrible, no good, very bad national security team he does. Is it because of "Javanka"? Is it because he's beholden to a gaggle of oligarchs? (Supposedly his being a self-financed billionaire made him immune from such influences.) Is it areflection of a personality disorder?

In the end it doesn't matter why, all that matters is what is. With Assange's arrest Trump is now exposed as the wholly owned subsidiary of the Swamp he ran against. He's now just a wheel fixed to an axle. All he can do now is it spin.

In my 2016 endorsement I asked the questions – only questions, not predictions – of what Trump might hopefully accomplish: 'Can we trust Trump? Will he build his wall and secure our borders? Renovate our deteriorating infrastructure? Restore our manufacturing base? Audit the Federal Reserve and defenestrate the banksters? Restore the GOP's long-lost reputation (now hardly remembered by anyone) as the "Peace Party" that got us out of wars the Democrats started? Sign a bill to defund Planned Parenthood, as long as they continue to perform abortions (which they will)? Exclude actual or potential Islamic terrorists? Dump our freeloading so-called "allies"? Cease the PC trashing of every tradition in which Americans once took pride? Reunite a nation sundered by Barack Obama and the GOP mandarins, with their divide et impera Punch and Judy show of class and racial discord?

'Can Trump really "Make America Great Again"? Or at least slow our decline and give our country another chance?