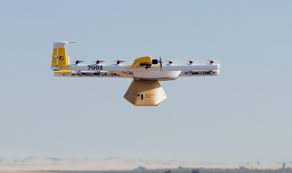 "Our service allows customers to order a range of items such as fresh food, hot coffee or over-the-counter chemist items on our mobile app, and have them delivered directly to their homes by drone in minutes," Wing wrote in a press release Monday.

The company launched the air delivery service earlier this week to residents in Crace, Palmerston and Franklin, which are suburbs in North Canberra. Next month, the service is expected to expand into Harrison and Gungahlin suburbs.

Wing partnered with local business in the Gungahlin area, so that merchants can utilize the quick delivery service to reach more customers per day. Some of those partners include Kickstart Expresso, Capital Chemist, Pure Gelato, Jasper + Myrtle, Bakers Delight, Guzman Y Gomez, and Drummond Golf.

Last month, we reported that Wing was "on the verge of launching" its new service. The company tested drones over Bonython, a suburb of Tuggeranong, a township in southern Canberra for about a year. During the trial, the drones delivered food, small household items more than 3,000 times to Australian homes.