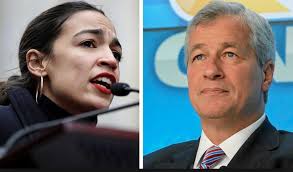 Update (10:25amET): The troubling trend of Reps using their time to castigate the CEOs instead of asking questions continued with California Rep. Brad Sherman. He questioned the CEOs about 'forced arbitration' after declaring "too big to fail is too big to exist", after explaining how the House narrowly avoided disaster by refusing to buy the bank's toxic assets during the crisis and instead buying preferred stock.

Update (10:12amET): NYC Rep. Velazquez became the first to address the ratio of CEO compensation to employees: Corbatt, who apparently is paid the most relative to his employees, took the brunt of her questioning.

Again, Dimon's own words were used against him, as Velazquez asked him if he would support undoing Trump's corporate tax cut: He replied 'no'. She also accused him of being 'disingenuous' with his comments on income inequality.

Velazquez continued the trend, observed by both Republicans and Democrats, of interrupting the CEOs and 'yielding' or 'reclaiming' their time.

Update (10:10amET): Rep. Wagner, a Republican, gave banks the opportunity to explain how they offer economic opportunities to American citizens by making mortgages and offering employment.

Update (10amET): Three questions in and we're already talking about guns. Rep. Maloney thanked Citi and BofA for cutting ties with gun manufacturers after Parkland. She then chastized Dimon for talking a big game in his shareholder letter, while arranging loans for makers of military style firearms, and the fact that last year JPM took partial ownership of Remington. She also accused JPM of refusing to adopt a policy about responsible lending to the gun industry, even as competitors have done so.

Will JPM commit to adopting a formal policy that ensures responsible lending to the gun industry, she asked? Dimon said JPM has a "small relationship" with gun manufacturers who also supply the military and police which JPM holds "in the highest regard".

Next up - overdraft fees: She accused Chase of being one of the worst offenders in overdraft abuses, and accused Dimon of "gouging" their most vulnerable clients. Dimon said the bank changed its overdraft policy in 2009 to require clients to opt in. Maloney has proposed legislation to force banks to "re-order" customer transactions to make sure important large payments like rent checks are processed first.

Update (9:50amET): Waters started the hearing by asking what banks are doing to identify any "Russian related accounts" and whether they've identified any "suspicious accounts or transactions."

Her screed began by bashing Deutsche Bank for its reputation for money laundering, and asking what the banks are doing to not be like Deutsche, in essence.