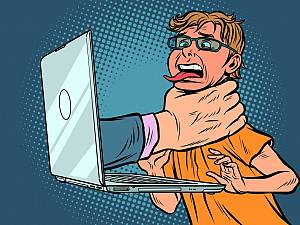 The United Kingdom appears to be following in the footsteps of the European Union and Australia in trying to punish online platforms that don't censor content the way government officials want them to.

The British authorities are pondering a proposal to create an entirely new government agency to regulate, and even punish, online communication platforms to make them more thorough in removing content the government deems dangerous or violent.

There isn't a full-fledged plan yet—more of a blueprint of what lawmakers would like to get passed. But the intent is very clear: The government wants to hold executives at various tech companies liable, financially and possibly even criminally, for content that officials do not want posted online.

Sadly, this move should not be surprising. Every outrage has led to more calls for regulation, and the viral distribution of videos of the recent massacre in Christchurch, New Zealand, may finally be the tipping point, or at least the latest excuse.

What may be more surprising is how willing people in the media—people whose work depends on the right to a free press—are to frame this as a story of wise leaders holding the feet of those irresponsible, profit-grubbing Silicon Valley tech bros to the fire.

Consider Tony Romm's report on the British plan, published in The Washington Post. It contains a lot of loaded language for what is supposed to be a straightforward news story. The lede to Romm's piece describes these online companies as having "long dodged responsibility for what its users say or share," not-so-subtly suggesting that Facebook and Google are getting away something sinister. The article later says these companies face this regulation because they are "failing to clean up a host of troubling content."

Romm uses the "experts said" route (he literally uses the words "experts said") to suggest that these regulations could stop the reach of violent content online, yet the only individual human beings quoted in his story are government officials. His example of an "expert" is U.K. Prime Minister Theresa May, who is proving to be no expert in anything at all.

Coronavirus XIV: The Good News is Still There But Not Reported By Mainstream Media

DR KAUFMAN M.D. EXPLAINS HOW THIS IS ALL FAKE

So Far, The Number Of Americans That Have Died From COVID-19 Is Greater...

CORONAVIRUS-19 What Is Really Going On?

The Pandemic Is, Not a Virus, But the Fear of a Virus