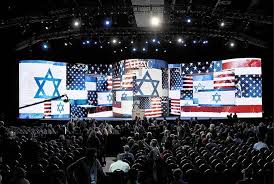 When Israeli Prime Minister, Benjamin Netanyahu, visited the 2019 AIPAC Conference, he must have been very happy. The US, in opposition to the rest of the world, recognized the Golan Heights as part of Israel.

Head of the House Republicans Kevin McCarthy, Senate Minority leader Chuck Schumer, Mike Pence, Vice President of the United States of America, US Secretary of State Mike Pompeo, speaker of the United States House of Representatives Nancy Pelosi, Senate Majority Leader Mitch McConnell, Bill de Blasio, Mayor of New York City, Nikki Haley, Former US Ambassador to the UN, US Ambassador in Israel David Friedman, and many other US leaders came to declare loyalty to Israel and the Jews.

For all the talk about Russian collusion in the US, the Jewish-Israeli collusion in the US is the biggest you will ever see. And it is out in the open for everyone to see. I do not think that there is more jewified goy country than the United States. They beat all records.