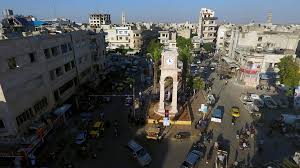 Militants, occupying large parts of the Syrian province of Idlib are readying a false flag attack involving chemical weaponry, the head of the Russian Centre for Reconciliation in Syria, Major General Viktor Kupchishin said on Friday.

The attack is being prepared in close cooperation between operatives of Belgian and French secret services and terrorist groups, including the rebranded Syrian Al-Qaeda offshoot – Hayyat Tahrir Al-Sham (HTS, previously known as Al-Nusra Front). Apart from them, the "pseudo humanitarian," as the General put it, White Helmets group is also taking part in preparations.

A batch of poisonous gas, believed to be chlorine-based, has been already delivered to a number of villages in the Idlib province. The poison is packed in canisters disguised as oxygen and natural gas tanks, according to the Russian military.

The plotters have discussed the filming of the upcoming false flag attack and are expected to repurpose footage of a recent Russian strike on a drone warehouse in Idlib to "prove" Moscow's involvement.

While the "actors" are offered some $100 for playing the roles of chemical attack victims, there's a distinct possibility that the militants will poison people for real to make the video more "lifelike," the official warned.