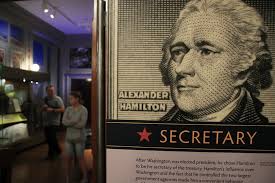 WASHINGTON (AP) — The upstart nation was a den of intellectual piracy. One of its top officials urged his countrymen to steal and copy foreign machinery. Across the ocean, a leading industrial power tried in vain to guard its trade secrets from the brash young rival.

In the late 18th and early 19th centuries, the rogue nation was the United States. The official endorsing thievery was Treasury Secretary Alexander Hamilton. And the main victim was Britain.

How times have changed.

Now, the United States accuses China of the very sort of illicit practices that helped America leapfrog European rivals two centuries ago and emerge as an industrial giant.

"The message we are sending to China today is, Do as I say, not as I did,′ " said Peter Andreas, professor at Brown University's Watson Institute for International and Public Affairs. "The fact of the matter is that the U.S. was the world's hotbed of intellectual property theft."

Having imposed tariffs on $250 billion in Chinese goods, the Trump administration is trying to force Beijing to abandon what it calls its brass-knuckles drive to exploit American technology to speed its own economic modernization. The administration alleges — and many China watchers agree — that Beijing steals trade secrets and coerces U.S. companies to hand them over as the price of admission to the vast Chinese market.

More than two centuries ago, the young United States, an agrarian backwater lacking in skilled workers, held a different view of other nations' trade secrets: They were, it seemed, up for grabs. In 2012, having surveyed the sordid history of U.S. industrial espionage, the journal Foreign Policy called America "the China of the 19th century.

"Only after becoming the leading industrial power did it become a champion of intellectual-property protections," said Andreas, author of "Smuggler Nation: How Illicit Trade Made America."

Hamilton, determined to transform America into an industrial power, argued in 1791 that the United States needed "to procure all such machines as are known in any part of Europe."

Trouble was, Britain, the world's technological leader, closely guarded its advantages. The London government imposed a 200-pound fine (equal to roughly $22,000 today) on anyone who tried to spirit industrial equipment out of Britain — a penalty that escalated to 500 pounds ($55,000) for critically important textile machines, according to research by Doron Ben-Atar, a Fordham University historian and the author of "Trade Secrets: Intellectual Piracy and the Origins of American Industrial Power."

For the 18th century United States to build its economic might, highly skilled or knowledgeable people were just as tempting a target as hardware. In the days before instruction manuals, manufacturers needed workers who knew how to assemble and operate machines acquired from overseas. Wary of the intrusion, Britain officials threatened headhunters with a year in prison for every British worker they recruited to work overseas.

TeeSpring Shop for Pirates without Borders