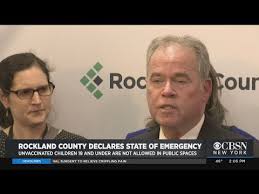 Hysteria over the unvaccinated is reaching unprecedented levels due to an "outbreak" in New York. Officials in Rockland County have declared a state of emergency and have banned unvaccinated children from public places.

The outbreak is now in its 26th week, and the ban, which expires in 30 days, went into effect at midnight on Wednesday. For individual unvaccinated kids, the ban lifts when they get their first measles shot. (Which actually makes them more likely to transmit measles to someone else. More on that in a moment.)

As of the time of this writing, there were 155 confirmed cases, according to the Rockland County government website, which also reports the following vaccination rates for the cases:

Nearly 6,000 children are impacted by the ban.

Anyone younger than 18 who is unvaccinated against the measles is now banned from public places until they receive the measles, mumps, and rubella vaccine. Those who are not able to receive vaccines for documented and confirmed medical reasons are exempt from the ban.

The public spaces include schools, stores, places of worship, and public transit.

According to The New York Times, the outbreak has been largely concentrated in ultra-Orthodox Jewish communities in Rockland, many of which have close ties to Brooklyn areas where there have also been infections.

Rockland authorities seem quite proud to be the first to implement this kind of ban.

At a press conference yesterday, Rockland County Executive Ed Day said, "We believe this to be the first such effort of this kind nationally and the circumstances we face here clearly call for that. Rockland will lead the way in service and safety to the people here."

Bill De Blasio And Bill Gates Do NOT Want You To See This!

"Space Bubbles" Line The Street At This NYC Restaurant

Six Months After The Pandemic Started: Manhattan Offices Are Only 10% Full