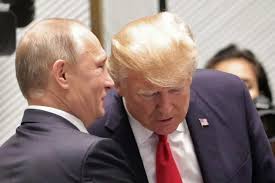 What a Friday that was. German manufacturing slumped badly; global manufacturing followed; yields tumbled; 10-year Bunds went below zero again for the first time since 2016; the US yield curve inverted 3M-10Y and 1Y-5Y, which has a pretty flawless record of calling US recessions (our call for 2020 already, of course); and the Turkish Lira collapsed again. So join the dots. The global economy is in real trouble long before central banks have come up with a cure for the new normal. Bonds have been right all along and equities have been wrong (as is always the case in my experience). And the knee-jerk 'sell USD trade' after a dovish shift by the Fed looks as silly as it always was - because if the US is in trouble, then everyone else is in far deeper doo-doo. Think second-order and third-order effects, people, not first-order.

Then we got the news that the Mueller Report has been handed over to the US Attorney General...and that was that. No more indictments. No impeachment of Trump. No proof of collusion. No Reds under every bed. No Putin on the Ritz. Unless something else appears related to it, the whole Mueller affair was, in short, the nothing-burger I have kept calling it in the Daily since it first started - and hence it has no market impact. Yet it isn't a nothing-burger. As Rolling Stone's acerbic Matt Taibbi --no Trump fan he!!-- notes, this utter mis-selling of events by channels like CNN and MSNBC, as well as newspapers like The Guardian, means "Russiagate is this generation's WMD times a million", a reference to the scare-stories on Saddam Hussein's "nukes" that led us to the 2003 Iraq War, and then to Iranian regional dominance and to ISIS, etc. In this case, the lasting damage is that after having screamed "Fake News!" and "Witch Hunt!" for nearly two years, President Trump can now Tweet "No Collusion. No Obstruction. Complete and Total EXONERATION. KEEP AMERICA GREAT!" and be legally correct. Which does nothing for the reputation of the media at a time when populism is not just knocking on the door, but is inviting itself in for tea and biscuits. On which front…

Far more significant, and of course overlooked by the same media rabidly obsessed with Russia and impeachment, was Trump announcing he will nominate Stephen Moore to join the Federal Reserve. This is an intellectual appointment on par with Larry Kudlow, not Janet Yellen. As one journalist reports it, the sequence of events ran allegedly like this: "Scoop on how this went down: At lunch last week, Kudlow showed Trump Stephen Moore's op-ed in WSJ. Trump said: Why didn't we make him Fed chair. Kudlow said you could name him to one of open seats. Trump said call him."