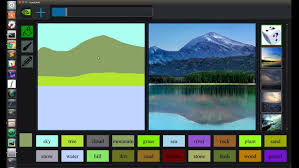 Back in the early yo dawg/me gusta era of internet memes, around 2010, some larrikin made an image ridiculing how-to-draw books. "How to draw an owl," it read. "First, draw some circles. Next, draw the rest of the [expletive] owl." It beautifully skewered the giant leaps some of these how-to books would take between steps, and much mirth was spread.

Well, it seems we can stop laughing, because nVidia has just built an app that lets you draw a few lines and circles, and will then consult its knowledge of a million-odd real images to draw the rest of the [expletive] scenery. And yes, it really does look that simple. Check out the video.

The app is named GauGAN, a nod to French post-impressionist painter Paul Gauguin as well as to the GAN, or Generative Adversarial Network processing that it uses to learn about and mimic scenes.

It's worth understanding a bit about GANs. nVidia founder and CEO Jensen Huang believes they're a massive step forward in deep learning and artificial intelligence, because they remove a huge bottleneck from the AI training process – human interaction. If you're trying to train an AI to recognize owls, for example, you need to feed it a huge number of images, and have a human tell it where the owls are. That's incredibly time consuming, as you'd imagine.