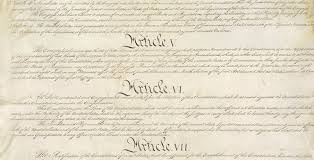 "Emergency does not create power. Emergency does not increase granted power or remove or diminish the restrictions imposed upon power granted or reserved. The Constitution was adopted in a period of grave emergency. Its grants of power to the federal government and its limitations of the power of the States were determined in the light of emergency, and they are not altered by emergency." — Chief Justice Charles Evans Hughes (1862-1948)

This week, the United States Senate will take a historic vote known as a negation, a statutory procedure whereby Congress nullifies an act of the president. The negation vote is authorized by the National Emergencies Act of 1976, which was written to permit the president to streamline government during an unforeseen crisis.

The act itself fails to define what constitutes an emergency, but the courts — as is their job where a law is ambiguous — have generally defined an emergency as a sudden and imminent threat to life, liberty and property that cannot be addressed by the exercise of ordinary government powers.

When Hurricane Katrina devastated New Orleans, President George W. Bush declared a state of emergency. That declaration enabled him to move government assets and materials to suffering folks without regard to environmental laws, public bidding laws or even local speed limits. But it did not permit him to spend money that Congress had not authorized, nor could he as president exercise any powers that the Constitution delegated to Congress.

President Donald Trump, in his recent declaration of national emergency at the U.S.-Mexico border, ordered the departments of Defense and Homeland Security to spend unused but unauthorized money in their budgets on building a 55-mile steel barrier — "a big, beautiful wall" — along a portion of that border. Because Congress has expressly and explicitly declined to authorize the funds for the construction of such a barrier, we have a constitutional conflict on our hands.

The conflict is more acute than just a difference of opinion. It is an issue for Trump of fidelity to his oath of office. Several of the statutes that Trump will be violating by spending unauthorized money on the border barrier he himself signed into law. In the presidential oath, the president agrees to enforce federal laws "faithfully" — whether he agrees with them or not.