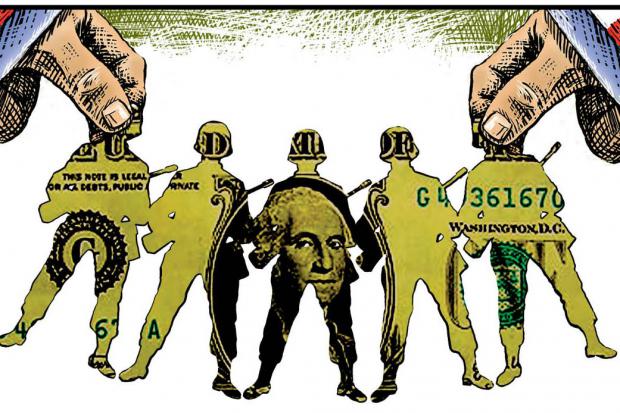 "Pity the nation whose people are sheep

And whose shepherds mislead them

Pity the nation whose leaders are liars

Whose sages are silenced

And whose bigots haunt the airwaves

Pity the nation that raises not its voice

Except to praise conquerors

And acclaim the bully as hero

And aims to rule the world

By force and by torture…

who allow their rights to erode

and their freedoms to be washed away…"

Our nation is being preyed upon by a military industrial complex that is propped up by war profiteers, corrupt politicians and foreign governments.

America has so much to offer—creativity, ingenuity, vast natural resources, a rich heritage, a beautifully diverse populace, a freedom foundation unrivaled anywhere in the world, and opportunities galore—and yet our birthright is being sold out from under us so that power-hungry politicians, greedy military contractors, and bloodthirsty war hawks can make a hefty profit at our expense.

Don't be fooled into thinking that your hard-earned tax dollars are being used for national security and urgent military needs.

You know what happens to tax dollars that are left over at the end of the government's fiscal year? Government agencies—including the Department of Defense—go on a "use it or lose it" spending spree so they can justify asking for money in the next fiscal year.

We're not talking chump change, either.

According to an investigative report by Open the Government, among the items purchased during the last month of the fiscal year when government agencies go all out to get rid of these "use it or lose it" funds: Wexford Leather club chair ($9,241), china tableware ($53,004), alcohol ($308,994), golf carts ($673,471), musical equipment including pianos, tubas, and trombones ($1.7 million), lobster tail and crab ($4.6 million), iPhones and iPads ($7.7 million), and workout and recreation equipment ($9.8 million).

So much for draining the swamp.

Where President Trump fits into that scenario, you decide.

Trump may turn out to be, as policy analyst Stan Collender warned, "the biggest deficit- and debt-increasing president of all time."

Rest assured, however, that if Trump gets his way—to the tune of a $4.7 trillion budget that digs the nation deeper in debt to foreign creditors, adds $750 billion for the military budget, and doubles the debt growth that Trump once promised to erase—the war profiteers (and foreign banks who "own" our debt) will be raking in a fortune while America goes belly up.

This is basic math, and the numbers just don't add up.

As it now stands, the U.S. government is operating in the negative on every front: it's spending far more than what it makes (and takes from the American taxpayers) and it is borrowing heavily (from foreign governments and Social Security) to keep the government operating and keep funding its endless wars abroad.