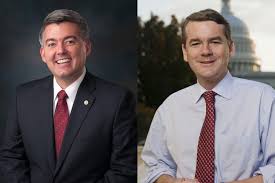 Do you ever communicate your disdain, frustration and exasperation with your two U.S. senators and House member? Well, I do! Both pretend to serve the citizens of Colorado and America. Both have failed miserably after over a decade in office.

They don't do their jobs. They don't serve America or her citizens. The bets are, your senators fail you, too. Otherwise, we wouldn't be in our national mess. Therefore, this week I wrote them this letter. And, you can do the same with your elected officials, because the fact remains, our U.S. Congress continues to fail the American people year after year after year. You may use this letter as a template and add your own ideas to your elected officials, newspaper or local radio and TV shows.

What have you done in your years in Congress?

1. What have you done about the 300,000 anchor babies that we pay for annually because of the 300,000 illegal alien pregnant women birthing them in our country? Answer: you've done nothing to create a bill to stop this usurpation of the 14th Amendment that was meant for slave children; NOT illegal alien mothers! Do something for heaven sakes!

2. What have you done to stop illegal alien employment in our country that draws illegal aliens so much so, that www.CIS.org states that over 500,000 illegals enter our country annually? Answer: you haven't done jack squat in 10 years in Congress.

3. What have you done to arrest employers of illegal aliens for breaking our current laws, Section 8 of the US code, 1324, and what have you done to pass E-Verify? Answer: not a darned thing in 10 years. It begs the question as to what in the daylights you're doing up there in DC for 10 years.

4. What have you done to stop the Iraq and Afghanistan, and Syrian Wars in the past 10 years? Answer: you keep funding them and you keep getting our kids killed. We didn't vote you into office to waste our money for 18 years in those useless wars. What in the name of common sense and reason gives you the right to continue and do nothing to defund those wars?

5. We've got a $22 trillion national debt? What have you done to stop it and reduce it? Answer: Nothing, absolutely nothing. Get off your tailfeathers and move toward solutions!

6. We've got air pollution, water shortages and resource shortages facing America because of human overpopulation. What did you do in 2013? You attempted to double legal immigration rates to 2 million annually. Where is your head and common sense? Zilch!

7. We've got race problems in this country, but you help illegal aliens and refugees more than our own African-American ghettos. Why don't you help our citizens? Answer that one, will you?

8. We face horrific infrastructure breakdown in this country, but you do nothing to fix it? Why? Why are we paying you to do nothing?