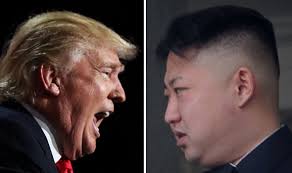 HANOI, Vietnam (AP) — After long journeys to Vietnam, U.S. President Donald Trump and North Korean leader Kim Jong Un are in place for their second summit Wednesday to address perhaps the world's biggest security challenge: Kim's pursuit of a nuclear program that stands on the verge of viably threatening targets around the planet.

Trump arrived late Tuesday in Air Force One after a long flight that included refueling stops in England and Qatar. He waved from the stairs of the presidential plane, then shook hands with dignitaries and walked along a red carpet to his motorcade

Kim arrived in Hanoi earlier and spent the day traveling around the Vietnamese capital in his armored limousine, his squad of bodyguards in tow as he visited the North Korean Embassy, with hundreds of visiting journalists and thousands of local citizens following in his wake. He took a train through southern China and then traveled to Hanoi by car from a Vietnamese border town.

The two leaders are slated to meet over two days, first at dinner on Wednesday followed by meetings on Thursday.

They first met last June in Singapore, a summit that was long on historic pageantry but short in any enforceable agreements for North Korea to give up its nuclear arsenal.

Trump has praised Pyongyang for ceasing middle tests and has appeared to ease up on demanding a timeline for disarmament. Kim is expected to ask for relief from crushing U.S. sanctions.

But before the summit began, Kim took some time to venture out of his locked-down hotel and check out parts of Hanoi, including his nation's embassy, where a loud cheer went up as he entered the compound.

Soldiers, police and international journalists thronged the streets outside Hanoi's Melia Hotel where Kim is staying, and hundreds of eager citizens stood behind barricades hoping to see the North Korean leader. As Vietnamese, North Korean and U.S. flags fluttered in a cold drizzle, dozens of cameras flashed and some citizens screamed and used their mobile phones to capture Kim's rock-star-like arrival.