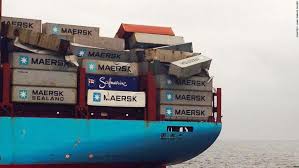 Denmark's shipping Maersk is the world's largest shipping company, and it is thus safe to say that what it sees in terms of global trade is indicative of real trade conditions around the globe. Which is bad news, because in an interview with Bloomberg TV on Thursday, shortly after reported dismal earnings, CEO Soren Skou said the global economic outlook for this year is looking bleaker than in 2018, which is affecting his business.

Skou said other factors impacting Maersk include the rising oil price, which affects input costs, adding that he sees no good reason why the price of oil might drop.

The reason behind Skou's pessimism is that trade tensions had led to a lot of front-loading of trade in 2018, and that effect is now disappearing, which means that the fallout of trade tensions will be far bigger this year, even as the balance between supply and demand in the industry is improving.

Earlier in the day, Maersk reported full year earnings, with the company's forecast EBITDA for 2019 understandably, coming in weak, and in fact the guidance missed the lowest analyst estimate, and now sees 2019 EBITDA of only $4 billion, far below the consensus estimate of $4.77 billion (range $4.11 billion to $5.40 billion).