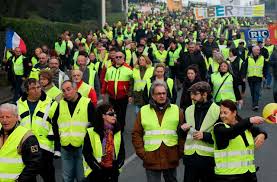 France gathered for the 15th week of Gilets Jaunes protests, with the injury toll of the worst civil unrest in decades now resembling that of a small war. Yet despite pleas from victims, Emmanuel Macron is tightening the screws.

"This is not normal. We are in France, one of the oldest and best democracies in the world," says Fiorina Jacob Lignier, who lost her eye at a demonstration in Paris on December 8. "We usually condemn from afar other countries where this occurs, that this is happening here is unbelievable."

Lignier, a 20-year-old philosophy student, traveled from the northern city of Amiens to march on the Champs-Elysees to protest against fuel taxes with her boyfriend, Jacob Maxime.

He told RT that they were marching with a column of peaceful demonstrators, when a group of masked radicals began to vandalize a shopfront more than 50 yards away.

The police "began shooting 'Flash Balls' and throwing grenades in all directions," during which the couple spent two hours "penned in between a line of gendarmes and a wall, with no chance to flee."

Lignier said the last thing she remembers was the cries of cops clearing the way for firemen, then a gas grenade hit her on the head, and she was on the ground.

When she woke up, her nose was broken, her face swollen from fractures, and she couldn't see through her left eye. Over the next 16 days, Lignier underwent two surgeries, and is still waiting for two more.

"My eye still hurts. During the next surgery, they will remove it. It's hard to get up to feel all this, I can't go to lectures, I can't read, and moving my eyeball is excruciating," said Fiorina.

"I do not recognize my country. These are not the values I was taught at school."

For most demonstrations anywhere in the West, Lignier's story would have made her a poster girl for law enforcement excesses. Among the Gilets Jaunes, her case is just one of many.

The sheer scale of concentrated peacetime violence since November is hard to comprehend.

Following last week's demonstrations, the Interior Ministry reported that 1,300 policemen and over 2,000 demonstrators had suffered injuries. Considering the difference in equipment and organization between riot police and the mostly unarmed crowd, most French media have speculated that the real civilian toll is several times higher, particularly as many have not had their injuries officially recorded.

Desarmons-les ("Disarm Them"), an activist group that protests against state violence, has been compiling a toll of the most serious cases.

The last one, dated from last month, lists 140 names. They include Zineb Redouane, an 80-year-old Marseille bystander who died of a heart attack as doctors tried to help her after police fired a tear-gas grenade in her face through the window of her apartment.

The FALL Of France! - Economy Faces IMMINENT Disaster! - Will People RISE UP?

Soldier's bedroom has not been touched since he died… in WORLD WAR I:

Escobar: Why Is France Hiding A Cheap And Tested Virus Cure?