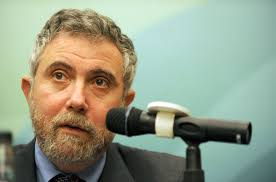 Per Krugman, the recession could occur towards the end of this year or in 2020:

I think that there is a quite good chance that we will have a recession late this year (or) next year.

According to the economist who won the 2008 Nobel Prize in Economic Sciences for his work on among other subjects trade theory, the next economic downturn could be prompted by a variety of causes.

Many Factors in Play to Trigger the Next Economic recession

Among the areas of concern for Krugman include the U.S. tax cuts which were passed by Congress in late 2017. The economist who teaches at Princeton University has questioned the effectiveness of the tax cuts. Other risk factors, according to Krugman, includes the bubble in the tech sector, which he believes may be deflating.

In Krugman's view, the European Union could be the first to feel the impact of a global downturn:

The place that looks really close to recession right now is the euro area.

This comes on the back of the European Commission (EC) revising economic growth forecasts downwards this year and the next. While euro zone recorded 1.9% GDP growth last year, the EC expects that figure to fall to 1.3%. In 2020 economic growth will rise slightly to 1.6%.

BOMBSHELL: Covid-19 isn't a pandemic plan, it's an EXTERMINATION plan for humanity