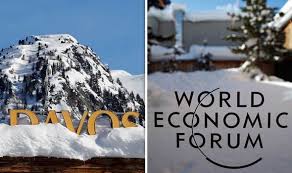 This is an elite conference that takes place at the end of January every year. It's held in the exclusive ski resort town of Davos, Switzerland, and is attended by billionaires, heads of state, and members of the mainstream media.

This year, the so-called Davos crowd met to discuss the rise of nationalism, economic equality, and climate change.

Now, I know most people agree that these are some of the biggest problems facing the world today. But I can't help but wonder if these are the people who should be trying to solve those issues. After all, you could easily make a case that these "masters of the universe" are to blame for these issues.

Justin: What do you make of the World Economic Forum [WEF] and the people who converge at Davos every year?

Doug: There are many conferences like the one in Davos every year. Including the famous Bilderberg Meeting, the Council on Foreign Relations, and Bohemian Grove in California.

The WEF meeting in Davos has become perhaps the richest and most important. The WEF has about 700 employees. I went on their website, and the emphasis is on things like "public-private partnership," "stakeholders," "social entrepreneurship," "sustainability," blah, blah, blah. All the usual virtue-signaling catchphrases. It was founded by a German academic named Klaus Schwab. Interestingly, he got a PhD in Economics from the University of Fribourg in 1967, when I was also there. If I'd met him, it's most unlikely we would have gotten along.

It's "invitation only" to top business executives, celebrities, bureaucrats, fund managers, academics, heads of state, NGO executives, and the like. The usual suspects. These people form a subculture. They're all members, or hangers-on, of various Deep States. They prefer to associate with other people they consider to be peers. If it turns out you don't share their worldview, you won't get invited back.

Davos is basically a love fest for the international ruling class. They like to get together, hang out, and schmooze because they all know about each other, even if they don't know each other personally. That's the essence of what goes on at Davos.

Now, I know the conspiracy types will say, "These people have gotten together to conspire against all of us little people." And some of that undoubtedly happens. That's nothing new. In The Wealth of Nations, Adam Smith pointed out that whenever people in the same business get together they always conspire against the public. Of course. That's human nature, and nothing new. It's just the normal state of things that should be accepted as reality.

Justin: Have you ever attended the conference in Davos?

Doug: No. Although I passed through when I was living in Switzerland many years ago. In the unlikely event I was invited, I wouldn't have much in common with the other attendees. I know that because I was invited to Concordia in New York a couple years ago. It was made up of exactly the same people who show up at Davos and conferences like it.

I found that I didn't like them. And I strongly suspect they didn't like me. Even though I was on my best behavior. But that's nothing new. I occasionally get invited to dinner parties in Aspen, with the same kind of people. But usually not more than once. Why might that be? Well, as you know, I say what I think. And that's usually at odds with what the Masters of the Universe think.

I ran something called the Eris Society in Aspen from 1980 to 2010. I described it as a gathering of people that should know each other but probably didn't know each other. It was, of course, invitation only. Attendees, generally, had to have done something to stand out. Lots of well-known people flew in to Aspen to give a presentation, and just talk to the other attendees for three days.

Justin: What sort of people attended your event? Was it the same crowd you'd find at Davos?

Doug: A very different crowd. Typically about 100, not very large, but with very few corporate bigshots, NGO types, government officials, or the like. Although we did get an unofficial – I think – visit from the FBI one year. They wanted to be sure nothing subversive was going on.

LIVE From Porcfest 2020 with Josh Sigurdson!