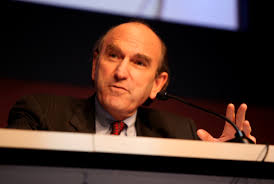 Abrams' appointment, announced Friday by Secretary of State Mike Pompeo, is something of a surprise — President Donald Trump nixed his 2017 bid to be deputy secretary of State after learning that Abrams had criticized him.

Abrams will now be one of several special envoys Pompeo has brought on board to tackle thorny issues. He takes on his role at an unusually volatile time in U.S.-Venezuelan relations.

Earlier this week, Trump announced he no longer recognized the legitimacy of the Venezuelan regime of Nicolás Maduro and said the U.S. now considers opposition leader Juan Guaidó to be the country's "interim president." But Maduro refuses to leave power and has declared that Venezuela will cut off diplomatic ties with the United States.

"This crisis in Venezuela is deep and difficult and dangerous, and I can't wait to get to work on it," Abrams said in brief remarks to reporters.

Abrams, who served in the Reagan and George W. Bush administrations, is a well-known and somewhat controversial figure in U.S. foreign policy circles.