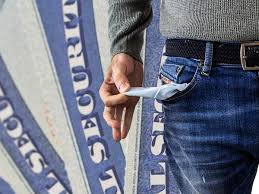 This idea was recently addressed in a MarketWatch article, which included this potential result:

As most retirees and soon-to-retirees already know, Social Security is slated to run out of money in 2034 and, unless changes are made between now and then, beneficiaries beginning in that year will receive only 79% of what they otherwise would be owed.

But the article continues by highlighting the uncertainty behind this and other "consensus" predictions (emphasis ours):

To be sure, predicting what will come out of Congress in the next few months is an inexact science at best, much less the next 15 years.

The article features an interview with one (of many) experts on Social Security, Andy Landis, who worked at the Social Security Administration (SSA). In 1983, changes were enacted that, according to Landis, bring a certain perspective to expert predictions about Social Security.

He mentioned that those changes brought about the surplus that would postpone the SSA running out of money until the predicted 2034. So there "should be nothing surprising" about the idea that Social Security could run out of money at some point, Landis opined.