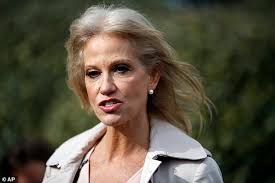 Cliff Sims, in his forthcoming memoir 'Team of Vipers,' paints Kellyanne Conway as a top leaker to the press and a 'cartoon villain'

'It became hard to look long at her without getting the sense that she was a cartoon villain brought to life,' he wrote in an excerpt published by Vanity Fair

'Over the course of 20 minutes or so, she was having simultaneous conversations with no fewer than a half­-dozen reporters,' he wrote

Conway snapped back in a statement

'The real leakers, past and present, get much more positive press than I do. While it's rare, I prefer to knife people from the front, so they see it coming,' she said