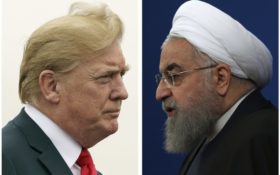 The biggest story in the Middle East – the biggest one in the entire world for the past decade – may happen any day now.

And it just might also turn out to be President Donald Trump's greatest foreign policy success yet.

One of the most infamous names in Iranian politics is warning that the people have had enough. Change could be coming – quickly – and the time of hardline Islamic extremism could be over.

That warning hasn't come from a Western analyst.

It's not wishful thinking from a Washington policy wonk.

It's not even a threat from the Trump administration.

It's from the grandson of Ayatollah Rouhollah Khomeini, architect of the 1978-79 Islamic revolution and the man who dubbed America "The Great Satan."

Hassan Khomeini warned the hardline government – a sworn enemy of the United States and Israel, and state sponsor of global terror – that they're going too far.

"Nothing should be imposed on the people in the Iranian society," he said, speaking out amid months of growing protests.

"We must find the rules for human behavior and the causes of stability and collapse in order to live according to them," he said, according to Iran News Wire. "Otherwise there is no guarantee that we [the regime] will stay and others will go."

In case that was too veiled a warning, he was crystal clear with his next sentence.

"If you do not follow the rules, they will take the arena from you," he said,

Yes, just as his grandfather "took the arena" 40 years ago, it can be taken back once the people are fed up with the restrictions, corruption and hardline behavior.

He even warned the government of "unpleasant consequences" if it doesn't pay attention to what the people want, Al Arabiya English reported.