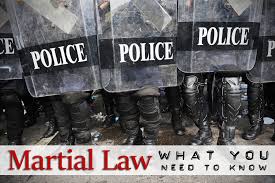 We live in an universe of duality, light and dark, good and evil, strong and weak. Along these lines, every single federal agency has loyalists and Deep State traitors operating inside of the power centers. They are both vying for control. Both are competing to impose their will on the parts of the government that each side does not control. It strongly appears that we are moving towards martial law. The question is, whose martial law will it be? Will it be a martial law controlled by the Deep State that would have to be predicated on a major false flag (eg Reichstag Fire)? Or, will it be martial law based upon a proven national security threat (ie the sedition currently occurring inside of California).

Trump's options are very narrow. He has cause, at this moment, to impose martial law because of the obstructionist actions by people like Governor Jerry Brown and the CALEXIT group. Their undermining of border security, the promotion of thugs to carry out the elite's agenda, are enough of a pre-emptive excuse to implement martial law on behalf of the administration-seeking-consolidation needed by Trump forces.

The other side needs to discredit Trump to the point where the public will accept a coup following false flag that will be blamed on Trump and his supporters. Who will win?

Presently, the opposing forces, inside our federal government, are competing for the control of every federal agency. The conflict has reached critical mass. The "Trump card", pardon the pun, is to gain ultimate control through martial law, and the signs point to a coming martial law due to leave cancellations and troop deployments, as well as changes in training modalities . In yesterday's article, I postulated that we are looking at Trump's intention to declare martial law in California in which the power center of that state will be transferred to New California's movement based upon executive order designed to correct the ongoing treason and sedition presently taking place in the former "Golden State". A declaration of martial law in California by Trump forces would provide the pretext to expand the dragnet and real indictments for key members of the Deep State would commence. I have several sources who are on board with the logic of this last statement. Although this is a high-risk strategy, it could result in Trump emerging as actually being in control of his administration, which he is presently not.

On the other side, the Deep State side, there are plans to initiate a coup, employed through a Deep State inspired false flag. In order for the Deep State plot to succeed, Trump must be first neutralized, either through assassination or indictment, or at least the threat of indictment. The threat of indictment could provide enough justification in the public's eye to oust Donald Trump. I know, some are saying the President would have to be impeached and convicted, not just charged by an Obama appointed prosecutor. But since when is our country following the rule of law? I today's climate, only the appearance of impropriety is needed to carry out the Deep State Democratic Party agenda.