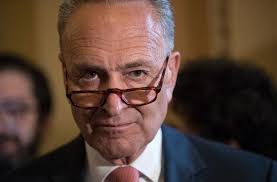 It's not your imagination. This isn't the stuff of tin-foil hatted conspiracy theorists, either. Newly uncovered documents prove that tech-giants like Google really are trying to rig the next president election.

They want to comb out conservative stories like this from its search results in favor of establishment Democrats like Senate Minority Leader Chuck Schumer. Or Nancy Pelosi. Or Maxine Waters.

Anyone… except information that could help conservative lawmakers. And the company's own internal communications show it has gotten so bad, the search engine giant has openly discussed censoring the stories American voters see, and labeling ones they don't like as lies.

Google execs think that tweaking your newsfeed and waiting for decades of uncontrolled immigration to kick in are enough to give Democratic leaders like Schumer a lock on national elections forever.

"Let's make sure that we reverse things in four years – demographics will be on our side," wrote Google engineer Scott Byer wrote in a message sent the day after the 2016 presidential election.

He said that the voters had been too easily distracted by "loud noises" and "false equivalencies."

"And Google, sadly, had a hand in it," Byer wrote in a message obtained by The Daily Caller.

"That's something that can and should be fixed," he told his fellow Google employees. Of course, CNN and liberal propaganda would be allowed — just not conservative opinion.

Since Google gave you the choice to read information from a conservative viewpoint, you got to make up your own mind…and Byer wrote that Google has "a responsibility" to attack "the quality and truthfulness" of conservative news sites like The Horn.

In other words, Byer recommended that Google censor sources that don't support Hillary Clinton, Barack Obama, and the liberal establishment.

Since more than 90% of all internet searches go through Google or its subsidiary, YouTube, blocking conservative sites would be a virtual blackout… and that's just the way Byer likes it.

And they tried to enlist themselves in the anti-Trump Resistance.

After Trump banned immigration from terrorist states, Google tried to warp news coverage to turn the public against him.

A manager said Google launched "a large brainstorm" in January 2017 about how they could "actively counter algorithmically biased results" that favored Trump's common-sense measure.