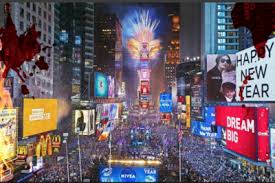 The latest threat circulated online follows other message from jihadists that have specifically cited Jan. 1 in calling for attacks.

One poster distributed online in mid-November superimposed a masked jihadist wielding a bloody knife over a collage of images from the 2016 Berlin Christmas market attack. It stated that New Year's Day is "the date of retribution."

Shortly after that, an ISIS-backing media group released an image of a demolished cityscape with multiple fires, warning, "Soon, Allah willing, the disbelievers will see the very thing they feared: 1-1-2019."

That same group just released an image of an armed jihadist overlooking New York, stating the city named with a blood-splashed 1/1/2019.

It's official. "Vaccine Passports" are required in New York

NYC Spent Nearly Half A Million Dollars Per Inmate In 2020, Report Says