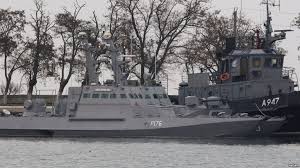 Ukrainian President Petro Poroshenko has signed a bill Monday to impose martial law in the country, in the wake of Russia seizing three of its ships and their crews.

The bill still must be approved by parliament.

Russia fired on two Ukrainian naval ships and rammed a third vessel Sunday in the Black Sea, seizing the ships and accusing them of illegally entering its territorial waters.

Poroshenko said Monday he wants to declare martial law "to strengthen Ukraine's defense capabilities amid increasing aggression and according to international law a cold act of aggression by the Russian Federation."He added that Ukraine intends "to keep adhering to all international obligations."

Russian Foreign Minister Sergei Lavrov accused Ukraine of violating international norms with "dangerous methods that created threats and risks for the normal movement of ships in the area." Russia continued to ignore Western calls to release the sailors Sunday.

The U.N. Security Council is holding an emergency meeting to address the situation in an effort to keep it from escalating.

Defend America, Not Ukraine: Treat Kiev as a Friend Rather Than an Ally

The Holodomor: Exposing What Stalin Did to Ukraine

NATO's Colonization of Ukraine Under Guise of Partnership

Ukrainian MP Found Dead With Gunshot Wound To The Head

There's No Longer Any Question: Biden Carried Out A Cover-Up In Ukraine