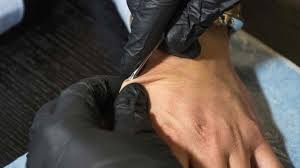 It's no coincidence that a veritable public relations advertisement concealed as an article in the Daily Mail regarding the microchipping of thousands of Swedish people would soon be followed up by an article announcing yet more microchipping of employees and individuals in the UK. That is just what is happening now in an article by the Guardian entitled "Alarm over talks to implant UK employees with microchips."

Although both articles present the idea of microchipping as something that is new and rarely done, the truth is that neither the technology nor the process is new and the practice is growing across Europe and North America at an alarming rate.

Britain's largest "employer organization" and "main trade union body" is now speaking out over the prospect of British companies implanting their employees for security purposes.

According to the Guardian, BioTeq, a UK firm, has already implanted 150 microchips in the UK. The company offers the chips to both businesses and individuals and the implants are being marketed mainly for convenience and the ability to access secure locations or simply to start their car with a wave of their hand. The chips can also store medical data and are similar to the ones implanted in pets.

These chips are so tiny that they can be implanted between the thumb and forefinger while others, such as the ones offered by Biohax of Sweden, are about the size of a grain of rice. Biohax was one of the topics of a recent publicity push in the European media to promote (by the cover of an article) the process and the company in general. It is thus not surprising that the company is back in the news this time around or that it is now in discussions with several British financial and legal firms regarding the possibility of implanting their employees with microchips. One of those companies has hundreds of thousands of employees.

Of course, one has to wonder whether or not the technological totalitarian society is marching ahead with that fast a stride or if the stories are merely designed to present the sense of inevitability (i.e. hundreds of thousands of people are about to microchipped) so that Brits will accept the coming push as just one more cultural change they have no choice but to accept. In truth, it is much more likely to be a blend of both.

Government Spies Are Tracking Brits Movements To Check If They're Complying With Lockdown; Repor

Man, 23, is banned from keeping pets for verbally abusing his Rottweiler after he was...