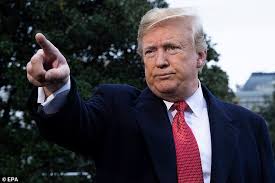 Trump complained about Brenda Snipes, the top election official in Broward County, Florida, whom a judge determined destroyed ballots in a past election

Snipes has been 'finding votes out of nowhere' to help Democrats overturn their defeats on Tuesday, he said at the White House

Florida law requires Snipes to tell state officials how many ballots were cast in her county, and to update the counting numbers every 45 minutes

Her office has done neither, causing Republicans to worry about a lack of accuntability that could be ripe for partisan abuse

He claimed Broward County, Florida was rife with fraud in 2016 and Democrats there would have engineered his loss if thay had 'found' enough votes

Democratic Sen. Bill Nelson has seen his losing margin dwindle to barely one-fifth of one per cent, close enough for a statewide hand-recount

Elias also led former Sen. Al Franken's recount effort that won him a seat by 312 votes even though officials counted ballots from at least 393 ineligible voters

'Our community is terrified, angry and frightened'...

Inside the 'culture of violence' alleged by LAPD SWAT whistleblower