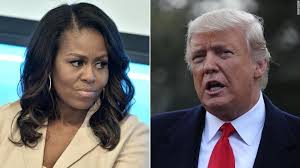 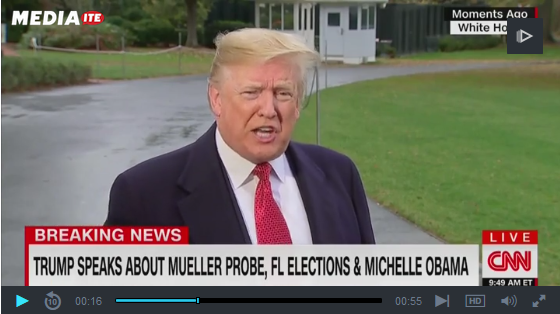 President Donald Trump slammed his predecessor, former President Barack Obama, hours after it was reported that the former First Lady Michelle Obama criticized Trump in her upcoming memoir for his years touting the conspiracy that Barack Obama was not born in the U.S.

The Washington Post, on Friday, published an excerpt of Michelle Obama's soon-to-be-released memoir Becoming. In it, she bashed Trump — saying she'll never forgive Trump for his birtherism.

The whole thing was crazy and mean-spirited, of course, its underlying bigotry and xenophobia hardly concealed. But it was also dangerous, deliberately meant to stir up the wingnuts and kooks…What if someone with an unstable mind loaded a gun and drove to Washington? What if that person went looking for our girls? Donald Trump, with his loud and reckless innuendos, was putting my family's safety at risk. And for this I'd never forgive him.

During a Friday morning pool spray at the White House, Trump was asked about Michelle Obama's comments. His reply?

"I guess she wrote a book. She got paid a lot of money to write a book. And they always insist you come up with controversial. Well, I'll give you a little controversy back. I'll never forgive [Barack Obama] for what he did to our United States military. By not funding properly, it was depleted. Everything was old and tired. And I came in and I had to fix it."