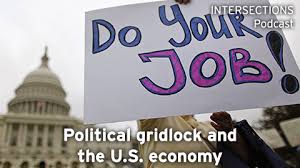 For once the pollsters were - generally - right, and while there was no blue wave, Democrats did win the House majority as most predicted, as Republicans not only kept the Senate majority but gained a few additional seats. The outcome, which had been extensively analyzed in advance, can be summarized in one word: gridlock.

Here, as explained by Goldman's political economist Alec Phillips, is what the US divided congress, i.e., gridlock, means for the US economy, and for US policies for the next several years.

A consensus outcome. With many races not yet called, most major media outlets have called the overall midterm election results: the House majority has flipped to the Democrats (many results are still outstanding but most projections suggest a split of roughly 230 Democrats and 195 Republicans in the House) and the Republicans will keep their majority in the Senate (most projections show 53-54 Republicans and 46-47 Democrats, including independents). The overall outcome was the widely held consensus view going into Election Day, though the Republican gain in the Senate is larger than expectations.

No major changes on taxes: We expect no major tax legislation to become law under a divided Congress. Democratic House leaders might attempt to pass tax legislation that redistributes the 2017 tax cut toward lower income households while also reversing the limitation on the state and local tax deduction. A proposal to partly reverse the corporate tax cuts is also a possibility. However, a proposal making substantial revisions to the 2017 tax reform legislation is very unlikely to attain the 60 votes needed in the Senate, if it even came up for a vote. Our projections of the growth impulse from fiscal policy assume no substantial tax changes will be enacted over the next few years, and the election result should not change this assumption.

Spending is likely to be extended around current levels: Under a divided Congress, we expect Congress to approve discretionary caps for defense and non-defense spending for FY2020 and FY2021 that are roughly flat in real terms with the spending caps for 2019 that Congress approved earlier this year. While President Trump has called for a 5% cut in discretionary spending—this would work out to around a $65bn (0.3% of GDP) reduction—we expect that Democratic House leaders will insist on a higher level closer to the current level. Note that whatever is decided is unlikely to influence spending trends until 2020, as the spending caps for FY2019 were already agreed to earlier this year. This legislative scenario is consistent with the assumptions underlying our current government spending forecasts.

Healthcare will be a major issue: Healthcare was listed as a top issue for more voters than any other in exit polling, with 42% listing it as the top issue. The Democratic-majority House is likely to pass drug pricing legislation, but it could be blocked in the Senate. That said, with President Trump also publicly supportive of drug pricing changes, Senate Republicans could come under pressure to reach a compromise on the issue.

Trade policy should not be directly affected: A Democratic House poses some risk to passage of the implementing legislation for the US-Mexico-Canada Agreement (USMCA), but we expect that the deal would eventually be approved. However, potential opposition could prompt President Trump to initiate the withdrawal process from the current NAFTA, forcing the House to choose between the new deal or none at all. We do not expect the midterm election outcome to change the Administration's direction on US-China trade policy, where we think additional tariffs in 2019 are more likely than not.