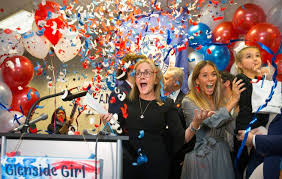 WASHINGTON (AP) — Democrats seized the House majority from President Donald Trump's Republican Party on Tuesday in a suburban revolt that threatened what's left of the president's governing agenda. But the GOP gained ground in the Senate and preserved key governorships, beating back a "blue wave" that never fully materialized.

The mixed verdict in the first nationwide election of Trump's presidency underscored the limits of his hardline immigration rhetoric in America's evolving political landscape, where college-educated voters in the nation's suburbs rejected his warnings of a migrant "invasion." But blue-collar voters and rural America embraced his aggressive talk and stances.

The new Democratic House majority will end the Republican Party's dominance in Washington for the final two years of Trump's first term with major questions looming about health care, immigration and government spending.

"Tomorrow will be a new day in America," declared House Minority Leader Nancy Pelosi, who would be in line to become the next House speaker.

But the Democrats' edge is narrow. With 218 seats needed for a majority, Democrats have won 219 and the Republicans 193, with winners undetermined in 23 races.

Tucker: This may be the last chance to save California

Colorado Investigating How Voting Machine Passwords Ended up on the Internet