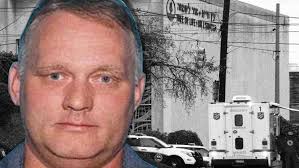 What we know so far:

11 dead; 6 injured after a gunman stormed Tree of Life Synagogue at corner of Wilkens and Shady Avenues.

Shooter was injured and cornered on third floor of synagogue

He reportedly shouted "all Jews must die" at police as he was being subdued.

In the basement, a second congregation had gathered. He shot them then fled to the third floor; There, Bowers exchanged gunfire with police and injured two police officers and two SWAT team members

Bowers posted on the social network Gab an hour before the attack that he was 'going in.' He regularly spewed his hatred of Jews and of President Trump on the website

According to the Anti-Defamation League, the attack was "likely the deadliest attack on the Jewish community in the history of the United States."