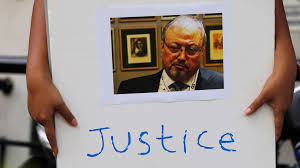 Now that the Saudis have admitted that the killing of Jamal Khashoggi was a premeditated act, Turkish President Recep Tayyip Erdogan is stepping up his rhetoric, saying in a speech to AKP party officials that whoever ordered the 15-man hit squad to travel to the Saudi consulate on Oct. 2. must reveal himself.

Erdogan also demanded that the kingdom reveal the location of Khashoggi's body, adding that the Turks have information about the killing that hasn't been publicly disclosed. If the Saudis truly did hand over Khashoggi's body to a "local cooperator", as they have claimed, Erdogan demanded they share the cooperator's identity with Turkish investigators, per Reuters.  The team of Saudi intelligence agents and a doctor specializing in autopsies was lying in wait for Khashoggi when he visited the embassy on that day to pick up documents to allow him to marry his Turkish fiance.

"Who gave this order?" Erdogan said in a speech to members of his AK Party in Ankara. "Who gave the order for 15 people to come to Turkey?" he said, referring to a 15-man Saudi security team Turkey has said flew into Istanbul hours before the killing. Erdogan also said Saudi's public prosecutor was due to meet the Istanbul prosecutor in Istanbul on Sunday.

While he has so far avoided using his name, the subtext of Erdogan's remarks was clear: the Turkish leader insinuated that Saudi Crown Prince Mohammad bin Salman, who is widely suspected of ordering Khashoggi's murder, admit to his role in the killing.

The kingdom has arrested 18 Saudi nationals and fired 5 intelligence officials in a purge that it said would help it hold the "rogue" killers accountable. MbS has been put in charge of a committee to oversee a reform of the kingdom's intelligence service. The Saudis notoriously denied having anything to do with Khashoggi's disappearance after he entered the consulate, before changing their story, saying instead that Khashoggi had been killed during a "botched" interrogation.

According to the FT, Erdogan angrily demanded answers from the Saudis and denounced the repeated changes in their story as "childish."

"These childish statements are not compatible with the seriousness of a [nation] state," he said.

If they are truly responsible, Erdogan demanded that Saudi Arabia hand over the 18 suspects arrested to Turkey so that can be tried and punished in Istanbul.

We're Living The Founding Fathers' Nightmare: America Is Corrupt To The Core

Battle Hymn of the Gesundheitsfuhrers: Sickness Is the Health of the State!

SpaceX's 1st Crew Dragon with astronauts to dock at space station today. Here's how to watch