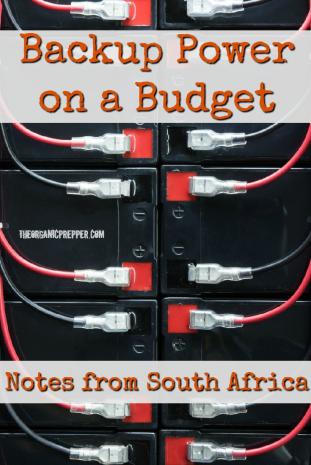 Editor's note: By now, just about everyone has heard about the difficulties occurring in South Africa. The violence is palpable, the corruption is an everyday fact, and utilities such as water and electricity are no longer a given. Not only that, but the cost of these utilities has become prohibitive, so conservation is a necessity. Backup power, such as solar or generators, have become a necessity for many families.

In this article, a regular reader from South Africa shares some of the tips for starting out with generators and backup power that have made it easier to deal with the continuous rolling blackouts and outrageous prices for electricity.  ~ Daisy

Living in South Africa we have had our share of rolling blackouts nationally. The cause: nefarious activities. The result being us forced to find ways to ensure we are not affected as badly.

The problem is better now, but it has highlighted that it is not just a South African problem, but in actual fact a Western world problem. We all are totally reliant on a massive aging infrastructure that can come tumbling down like a house of cards, with or without help.

Another problem is the cost to keep the national system operational. In some areas, it is not a priority to resolve the regular failures.

For getting started with backup power, remember that NEEDs vs WANTs –  a huge price difference.

*UPSs – with like 2 up to 8 100ah batteries. Good for a number of hours depending on use – most cost-effective solution

*Generators – works for some, but cheap ones cost more as they damage some electrical appliances over time.

*Solar inverters and panels – power failures, what is that? And you save a lot of money afterward IF YOU DO IT RIGHT.

What is also good to know, when the power goes off, switch off your distribution board, leaving just the light plugs on. When the power comes back on, lights come on, wait a few minutes for the grid to stabilize, before switching things on. We have lost computers, internet modes, freezers/fridges, alarm systems etc, damaged when the grid goes off and back comes on. UPS'es have the best protection for this.

How does one solve the issues from frequent blackouts?

Here are some pertinent notes from my own experience.

*Older fridges/freezers have a huge start-up current, necessitating a bigger inverter and they use a lot of kWh over 24 hours. Upgrade them to an A++ or even A+++ model, as soon as you can. It will save you on utilities and can be powered longer on batteries.

*Lights: obviously CFL and / or LED, and not cheap LEDs. They are cheap for a reason. Test the wattage, it may be more than the claimed wattage "saving" you nothing. Check the claims lumens.

*Putting lights on solar is not a "savings". It is actually an increase in cost for batteries are more expensive per kWh than utility power costs per kWh because lights are use when there is no solar power. So switch to the best lumens for the lowest watts, and switch the light off when not in use, biggest saving ever.

*Stove/oven/kettle – entire kitchen – on solar power is doable, but expensive. Utilities are cheaper. Kettle take few minutes to boil, microwave also a few minutes, why spend more on inverter and batteries to power them. Use gas. Gas per unit of power may not be cheaper than utilities. Check what you are paying for each.
Maximum savings are: Switch off at the wall, not in standby, for all the standby power adds up to a lot of power paid for, yet not used.

*When all the occupants of a house are asleep, say 11pm – 5am – how much power is used during that time? Excluding alarms and outside lights – which have a motion sensor to switch on. Figure this out and find places to cut.

'Clean Energy' Is Dirtier, More Expensive And Destructive Of The Environment