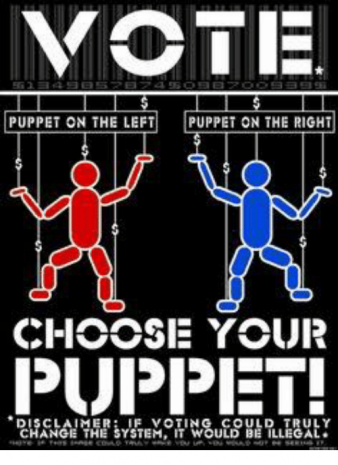 Ironically, many of the pages that were shut down had absolutely nothing to do with politics or elections, unless you include the fact that they recommended skipping the entire circus. None of these pages were accused of being "the Russians," who were the scapegoat of the last surprise presidential election results. A couple of the things that many of the pages did have in common, incidentally, were an anti-war outlook and a police watchdog mentality.

But as far as making the election more resistant to interference, the result of the Alternative Media Purge is the diametric opposite. People will now only get one side of the story.

The alternative media changed everything during the last presidential election.

When Donald Trump announced his candidacy for president, much of the world snickered. Who was this reality television star to take on part of the Clinton Empire? There was no way, people scoffed, that Trump could possibly win.

It's a proven fact that Hillary Clinton was in cahoots with the mainstream media throughout her candidacy. And the reason it's proven is that organizations like Wikileaks released the evidence of it in a series of emails with her campaign manager and people like Donna Brazile of CNN. Brazile finally publically admitted that she'd done so and that it was her "job to make all our Democratic candidates look good."

The alternative media jumped on this story, as well as many other questionable emails that were divulged by Wikileaks, while the mainstream pretended that none of this was happening. And the mainstream did very little to cover the Democratic National Convention, during which the nomination was stolen from Bernie Sanders, who – if we're being honest – probably would have had a much better chance of beating Trump than the notoriously unlikable Clinton. Here's my coverage of it at the time.

The alternative media, never a fan of the goings-on in Clintonland, from the Haiti scandal all the way back to the "suicide" of Vince Foster in Arkansas, jumped on these stories as well as stories about her debatable health.

The fact that we had a robust alternative media at the time meant that these stories were heard. At the same time, the mainstream media was busy painting Donald Trump as a neo-Nazi fascist who hated minorities and would nuke somebody the day he got into office.

Now, imagine there had been no alternative media during that election.

If we hadn't have had an alternative media telling other stories – enough stories that people were able to get a fuller picture of who both of these candidates really were – things might have turned out entirely differently. And while that would be all right with any number of people who loathe Donald Trump, would it have been a "fair" election?

Let's look back even further at the candidacy of Congressman Ron Paul back in 2012. Dr. Paul was an incredible candidate with a glowing political resume, but he didn't get the time of day. There was a media blackout on his candidacy and finally, he was forced to withdraw from the race. Many of us were budding alternative journalists at that time learned a valuable lesson during that election – what we were doing was important. There needed to be an option instead of letting the mainstream media present the only options and information to people.

By the time the 2016 election rolled around, those disappointed in how Dr. Paul was treated were determined that it would not happen again. That a candidate with a background full of sordid scandals would not get through an election cycle unscathed, painted as a glowing Madonna who would save us all.