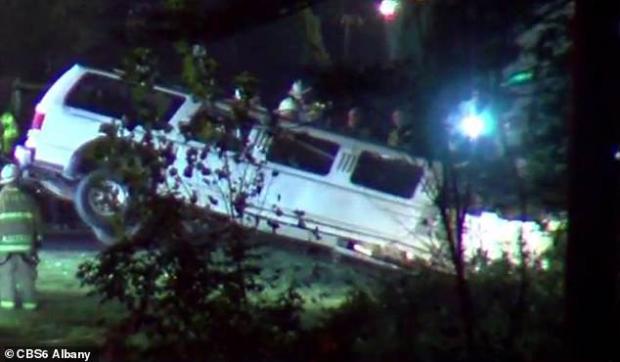 Silly me. All those years I worked as an investigative reporter for TV and radio have left me with a usual reaction to ask questions beyond the superficial.

To say nothing of the fact that I'm naturally curious – endlessly so. When I was a kid, some called me nosy – but I didn't care – and as it turned out, it led to a fascinating career asking questions.

I have relatives in the Albany, New York area. When I heard about the horrific limousine accident near there, in Schoharie, that left 20 people dead, I did more than just the superficial reading of news articles in my local paper. I wanted to know what happened and why.

The immediate headlines were of the accident itself, the deadliest transportation accident in this country since a 2009 airline crash near Buffalo that killed 50. But there was more, and that intrigues me.

This was a limousine, carrying 17 passengers and the driver, which tore through a stop sign at a busy intersection, hit a parked Toyota Highlander and also hit and killed two pedestrians. Twenty dead, apparently instantly.

The immediate news coverage was of the accident itself, with images of the wrecked limo being towed from the location and the details about the passengers. It was a group of young friends and family, newly married couples and some singles, going to a birthday party. They hired the limo so no one would have to drive. But they all died.

The investigation began immediately. Why didn't the vehicle stop? Why did it speed off the road, leaving no skid marks? Was anyone wearing seatbelts? The data recorders and the mechanical systems of the vehicle will also be examined. The driver's record and qualifications are being checked and an autopsy done to see if drugs or alcohol were involved.

But there were immediate red flags. New York Governor Andrew Cuomo said the driver didn't have the necessary commercial license, and the vehicle failed a recent state inspection of chassis suspension and brakes.

He also told the Associated Press that the limo, which was built by cutting apart a heavy-duty SUV and lengthening it, had been built without federal certification. The NTSB will determine if it met federal standards.

Cuomo added, "In my opinion, the owner of this company had no business putting a failed vehicle on the road. Prestige has a lot of questions to answer."

Indeed. Who owns the Prestige Limousine Company and how did they maintain their vehicles?

The family of the limo driver believes he was given an unsafe vehicle. His widow said her husband had expressed concerns about the vehicles.

Kim Lisinicchia told CBS that she heard her husband Scott tell the company several times he would not drive a certain vehicle, and that "You need to get me another car." But then, she said, he trusted the company.

She added he was in excellent health, and was an excellent driver, having driven tractor-trailers for more than 20 years.

A relative of one of the passengers got a text from inside the limo just before the accident saying they had been in one vehicle which broke down and transferred to this one and it was in terrible condition. What was that all about? They also said they heard loud noises from the engine.

And then there's the company owner.

The "operator" of the company is 28-year-old Nauman Hussain. His father, Shahed "Malik" Hussain, a Pakistani immigrant, is the owner of the company, but he's been in Pakistan for health reasons.