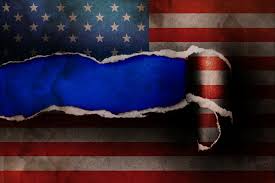 If you were to read about the United States of America from someplace else, you'd probably think it was a nation full of people who are gearing up to go to war. Anyone would think the same thing from what they saw in the media. You would see hysterical rage fueling terrible acts. You'd see the intense hatred between people who belong to different political parties. You'd believe this is nationwide.

But it's not. Sure, there's some tension if you talk politics, but in most places, it isn't crazy in a life-threatening kind of way. Mostly, it's pretty friendly.

But this isn't the America of the media.

When I went through the news today to search for a writing topic, it was like being hit with a wall of despair. Parts of the country are truly in bad shape. The venomous hatred is like nothing I've ever seen in this nation.

There are absolutely pockets of rage – violent enclaves studded with people who are nothing more than domestic terrorists. Full-on fascists who unironically call themselves anti-fascists.

In Portland yesterday, some people in masks (and some who brazenly went without them) took over a major intersection and "directed" traffic, shouting obscenities and racial slurs toward white drivers. An elderly man became fearful and drove through them. They chased him down and began striking his vehicle with batons and rocks. AN OLD MAN. They were within minutes of beating him, according to reports. Meanwhile, the police "monitored" the situation from a distance, allowing the mob free reign. (Read more at Zero Hedge.) Near Portland, arsonists actually set fire to a truck bearing a couple of pro-Trump stickers.

In Kentucky, Senator Rand Paul's wife sleeps with a gun. Fear is now a constant companion for her. She wrote an open letter to Senator Corey Booker that was published on CNN, calling him out for urging people to "get up in Congresspeoples' faces." Booker isn't the only member of Congress who is inciting violence, either. Judicial Watch has filed an ethics complaint against Representative Maxine Waters for "inciting violence and assaults on the Trump Cabinet."

It goes on and on. A writer for The Late Show tweeted "I'm just glad we ruined Brett Kavanaugh's life." A special education teacher in Minneapolis tweeted, "So whose [sic] gonna take one for the team and kill Kavanaugh?" An executive from Google tweeted, "You are finished, @GOP. You polished the final nail for your own coffins. F–K. YOU. ALL. TO. HELL." And these are just this week. Wow, and we thought Trump's tweets were a bit over the top.

Lest it seem one-sided, there's a whole language that angry conservatives use to insult liberals on Twitter. Twitter is a verbal war zone and there aren't a lot of people taking the high road there.

Over the past year, we've seen violence at a Unite the Right rallies, notably the one in Charlottesville, Virginia that left a woman dead when a car drove into a crowd.

It's impossible to find truly unbiased links for all of these and that leads me to my point.

It isn't like this in everyday America. The media is painting an ugly picture and putting that picture everywhere so it seems like this is our reality.

Rage is not the reality for most of us.

A couple of days ago, my neighbors were grilling and we chit-chatted over the fence. They shared some delicious southern barbecue with us, and I passed on some of the last, delicious late tomatoes to them. They had a Hillary Clinton sign in their yard when we moved in, but they still caught our dog Bella and brought her home when she escaped over the fence for a little walkabout.