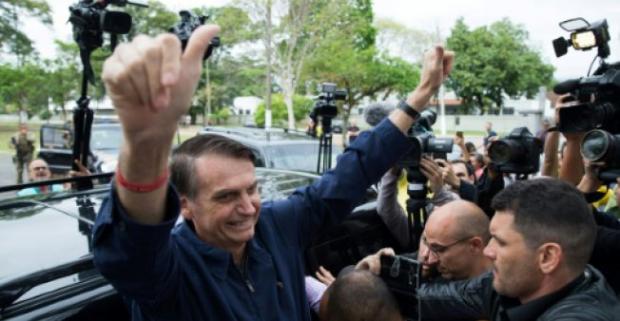 For many, Bolsonaro has the answer to the question that has preoccupied them for years -- how to lower the crime rate in a country with more than seven murders an hour?

"Give guns to good people," the former paratrooper insisted during campaign meetings.

"If one of us, a civilian or a soldier, is attacked... and if he fires 20 times at the assailant, he should be decorated and not have to go to court," the far-right candidate told a campaign meeting in the northern Rio neighborhood of Madureira in August.

It was a simple speech that hit the mark for Jamaya Beatriz, a manicurist from this violent suburb of Rio De Janeiro.

"I live in a dangerous neighborhood," the young woman said. "If someone breaks into my home, I want to be able to defend my children."

Sara Winter, a right-wing candidate for the National Assembly, finds it positive that Bolsonaro wants to arm women "so they can defend themselves, increase penalties for rapists and introduce chemical castration."

NYTimes Quashed Story About 2016 WH Meeting With 'Whistleblower' & Ukrainians On Burisma: Re

The Byzantine Empire Wasn't Byzantine at All, It Was Christian Roman, And It Thrived Over 1000 Y

WTF Chart Of The Day: Bonds Ain't Buying It

Werner Herzog: 'Piracy Has Been The Most Successful Form of Distribution Worldwide'

A "Pro-Life Hero"? Trump Becomes First President To Speak At 'March For Life'

The Debate Is Over: In Two Months "Not QE" Officially Becomes QE 4